Yes, Initiates! We got another still of Tris, Four and Peter, this time in Amity! As everyone is carrying food, we guess they are in the cafeteria (trying the Amity bread?) with Four and Peter about to get into a fight.

The still was revealed yesterday by LA Times, with the following plot: “In the ruins of futuristic Chicago, rebels battle a power-hungry cabal.”

We’re more than excited for ‘Insurgent’! If you missed the latest still check it out here. 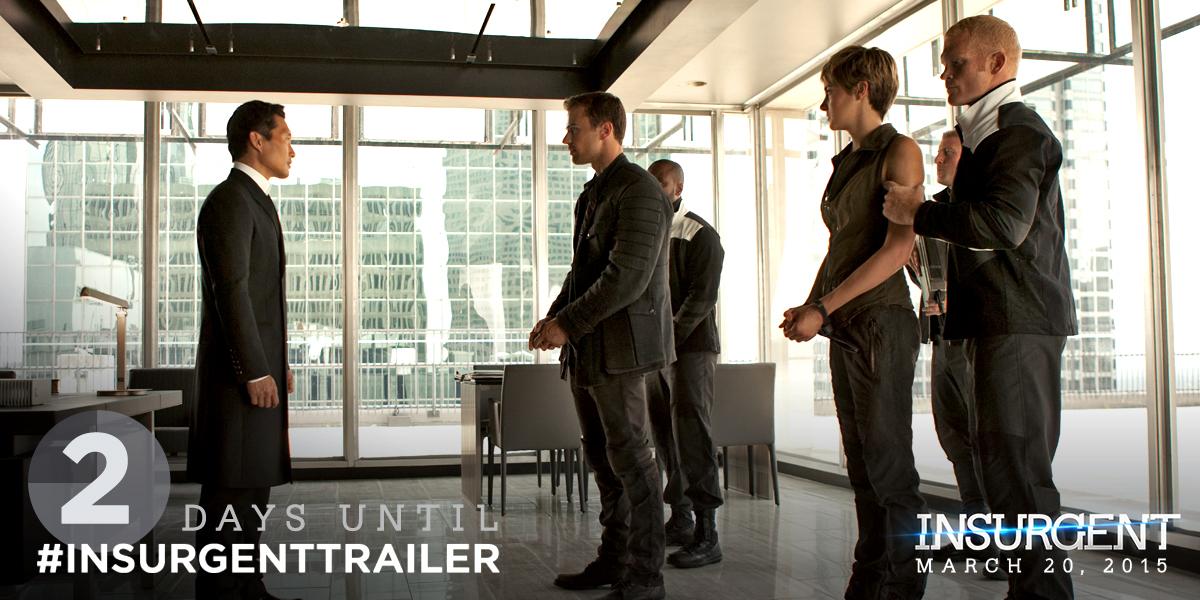 A new still has surfaced of Tris and Four during Capture the flag. The picture features Shailene Woodley as Tris and Theo James as Four playing holding paintball guns during capture the flag.

What do you think? Share your thoughts in the comments!

A brand new Divergent still has surfaced. It features Tris and All in Dauntless in sitting on their bunks.

Thanks to our friends over at TrisandFour.com for finding this.

We can now officially say that Divergent comes out this year. To set off the new year a brand new still was revealed by by 9News.com. They were sharing Film to look forward to in 2014 and Divergent was one of them.

The still features Tris and Four. It seems to be when all off Dauntless is supposed to be under the simulation.

Check out the new still of Tris and Four below:

“Divergent” (March 21). This adaptation of the popular dystopian novel finds the people of Chicago divided into factions based on their human virtues. Teenager Tris (Shailene Woodley, left,) learns she has three qualities instead of just one – meaning she’s “divergent” – and discovers dark forces are afoot in the city during her initiation process. Jaap Buitendijk, Summit Entertainment

Thanks to @tobiasandcake for finding it.

A brand new still of Four and Tris has surfaced. The still is from when Tris and Four are about to go into Four’s. Fear landscape.

What do you think?

USA today released a brand new Divergent photo of Tris and Caleb at the Choosing Ceremony.

USA Today also did an interview with Shailene Woodley:

CHICAGO — The sacred Choosing Ceremony Day has arrived on the set of Divergent.

One by one, the candidates step onto the marble altar in front of hundreds of citizens, standing before five ceramic bowls to make their fateful decision: Which of the five social factions will they join in the socially stratified world of this dystopian future?

The heroine of Divergent, Tris (Shailene Woodley), steps cautiously onto the altar, stopping before the ceremonial bowls representing Abnegation (the selfless), Candor (the honest), Amity (the peaceful), Erudite (the intelligent) and Dauntless (the brave).

She pauses for 15 seconds, deep in thought, before finally drawing a knife over her palm above her chosen bowl.

“Dauntless,” a voice cries out.

The Dauntless faction in the auditorium lets out a berserk cheer in the way that only the chosen protectors of a society can. But Tris still seems distracted as she makes her way over to her new family and sits quietly in the front row.

It is, after all, a life-changing decision and a blood bond with her new faction, which requires Tris to leave her parents, who look crestfallen in the Abnegation section.

“There’s a lot going through Tris’ head. This is a definitive decision,” Woodley says afterward. “She doesn’t think her home is ever going to be reopened after this. So she’s understandably extremely emotional.”

But the scene, shot in Chicago’s modern Seventeenth Church of Christ, Scientist in front of hundreds of extras, has an even deeper meaning for Woodley, 21. Taking the role of Tris in the potential blockbuster franchise — Divergent is the first of three books from Veronica Roth and is on a pace to sell 4 million copies — was a step Woodley insists was taken with a great deal of care.

Taking an on-set break on a steamy July afternoon (with the church’s air-conditioning system in disrepair), still wearing her Abnegation garb, Woodley recalls the thought process of joining Divergent (out March 21).

“It was a huge decision,” she says. “At first, I was not planning to take this opportunity, because it felt overwhelming. If there is success and if it happens in a way that was anything similar to Hunger Games or Twilight, that’s extremely intimidating. Especially for a very homely nature chic like me.”

“This movie has a massive audience and machine behind it. It exposes her to a different situation for her life. It’s a different thing from the independent movies that she’s been doing, which are really great. ”

“She was this rebel where she had this cockiness, yet underneath, she was vulnerable and capable of all sorts of hurt,” he says. “I loved that quality about her.”

He offered her what many actresses would consider the role of a lifetime. But Woodley says she was still thinking about saying no until her mother convinced her that she would be “crazy not take this on.”

“My mother said, ‘You’ve never declined a part because of what could happen. You’ve never not done something from a place of fear,’ ” Woodley says. ” ‘You cannot say, this is a big-budget film, so I don’t want to do it. You have to decide if you are passionate about it.’ “

Check out the rest of the interview at USA today