Yesterday, the official Divergent account on twitterrevealed a new still of Tris, Four and Peter in Erudite headquarters, and for the worried look on everyone’s face we believe this is just after Peter fakes Tris’ death. 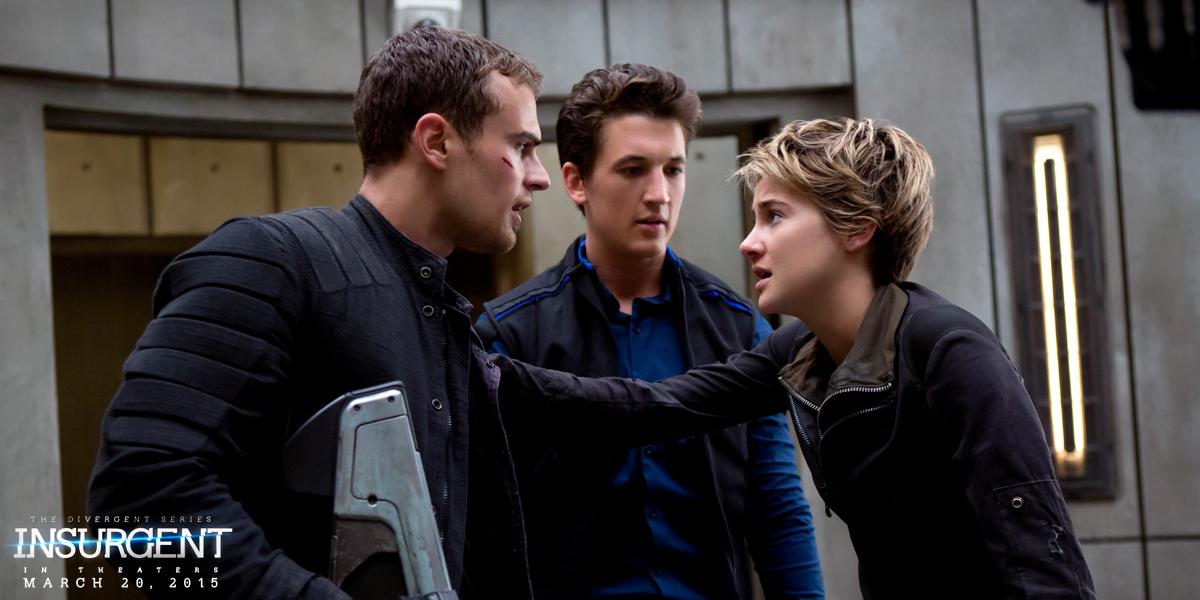 When do you guys think this is? Tell us in the comments or tweet us at @DivergentFction.

Exciting news! We’ve took our time to collect all the new photos and videos fellow fans have shooted of the zip lining  and the Candor headquarters in the ‘Insurgent’ set.

Let’s start with the very first photos of the honest faction, Candor, were we can spot some members wearing their characteristic colors, black and white:

If you were dying to see the Dauntless, here’s the top of the building where the bravest faction goes zip lining:

A few seconds of stunts:

Vía ‘Tris and Four’ and ‘Fangirlish’

Summit Entertainment just released a statement about the Divergent DVD. The movie  is set to be released on August 5th in DVD and Blu-ray.

SANTA MONICA, CA (May 20, 2014) –  Lionsgate (NYSE: LGF), the premier next generation global content leader, will release the electrifying first installment of the blockbuster action adventure franchise Divergent  on Blu-ray Combo Pack (plus DVD and Digital HD), DVD (plus Digital), Video on Demand and Pay-Per-View on August 5, the Company announced today.   The film will be available on Digital HD two weeks early on July 22.

Based on Veronica Roth’s #1 New York Times best-selling book series which has sold nearly 22 million copies worldwide, the film features an all-star cast including Shailene Woodley, Theo James, Academy Award® winner Kate Winslet and Ashley Judd. To date, Divergent has grossed nearly $150 million at the domestic box office and more than $250 million worldwide in its theatrical release on Lionsgate’s Summit Entertainment label, getting the ‎new franchise off to a fast

Packed with bonus material, the Blu-ray Combo Pack includes the documentary “Bringing Divergent to Life,” an in-depth look at the making of the film plus the exclusive featurette “Faction Before Blood,” detailing the film’s future world. The Blu-ray Combo Pack and DVD both feature deleted scenes and two audio commentaries – one with director Neil Burger and one with producers Douglas Wick and Lucy Fisher. The Divergent Blu-ray Combo Pack will be available for the suggested retail price of $39.99 and the DVD for $29.95.

Divergent is a thrilling action adventure set in a future world where society has been divided into five distinct factions. But Tris will never fit into any one group—she is Divergent, and what makes her different makes her dangerous. Targeted by a faction leader determined to eliminate all Divergents, Tris turns to the one person she believes she can trust: Four, an instructor for the militant Dauntless faction, and a man full of dark secrets. Together, Tris and Four uncover a mind-bending conspiracy that will put their courage to the ultimate test…and forever link their destinies.

Lionsgate is a leading global entertainment company with a strong and diversified presence in motion picture production and distribution, television programming and syndication, home entertainment, family entertainment, digital distribution, new channel platforms and international distribution and sales. Lionsgate currently has 34 television shows on 22 networks spanning its primetime production, distribution and syndication businesses, including such critically-acclaimed hits as the multiple Emmy Award-winning Mad Men and Nurse Jackie, the comedy Anger Management, the network series Nashville, the syndication success The Wendy Williams Show and the critically-acclaimed series Orange is the New Black.

Are you excited about getting the Divergent DVD?

Shailene Woodley and Ansel Elgort are on the cover of this week’s Entertainment Weekly.

In this week’s Entertainment Weekly, Sara Vilkomerson reports from The Fault in Our Stars set in Pittsburgh and explores how TFIOS — which tells the love story of two teenagers who meet in a cancer support group — became an unlikely YA phenomenon. “I tried to write the funniest, most honest love story I could about these kids who were living with a difficult disease. I never thought it would popular,” says Green. “I certainly never imagined it would be a movie.”

Luckily, one studio decided to take a chance on the project. Fox 2000 president Elizabeth Gabler remembers how producer Wyck Godfrey convinced her to make the film. “Wyck called me and said, ‘You can’t pass on this. You have to do this,” she says. “I said, ‘Why are you doing this to me?’ And he said, ‘Because. It makes you remember when you were a teenager and you were in love for the first time and you didn’t want to hang up the phone.’”

The #DemandOurStars winning cities have been announced along with the new extended trailer! Shailene Woodley, John Green, Ansel Elgort and Nat Wolffe will all be touring.

Check out the winning cities below:

Once we know how to get passes to the screenings we’ll let you guys know.

Entertainment Weekly has just revealed exclusively Grouplove’s ‘Let Me In’ from The Fault in Our Stars soundtrack.

CLICK HERE TO LISTEN TO GROUPLOVE’S “LET ME IN”!

Check out the full track list for The Fault in Our Stars soundtrack:

Next month is the month that the sequel to Divergent, Insurgent will start filming. Fanbolt is reporting that Insurgent, is slated to begin filming on May 27 in Atlanta, GA.

Insurgent is scheduled to hit theaters on March 20, 2015.