Variety is exclusively reporting that the final film in the Divergent series will become a television film and will lead up to a TV series spinoff.

Negotiations are in the early stages, but instead of having “The Divergent Series: Ascendant” open in theaters next year, the studio wants to wrap up the film series on the small screen, according to an individual with knowledge of the situation. That would then segue into a standalone television series set in the same post-apocalyptic world.

Lionsgate’s television group will handle production. The idea is to finalize the storylines involving the current cast and to introduce a new cast, who would then continue the series on either a traditional or streaming network.

It has not been reported that any of the stars from the film series, Shailene Woodley, Ansel Elgort, Theo James or any of the others will return to reprise their roles.

The lovely folks over at Lionsgate have been so kind enough to let us do a giveaway of some Divergent swag.

The prize pack includes the following

To enter you must be a US resident and all you have to do is leave your favorite character from Allegiant and your email address in the comments. Someone will be selected on March 18th.

It’s been almost 2 motnhs since ‘Allegiant part 1’ started filming in Atlanta, and we keep getting set pics! Check out what the cast is up to below: 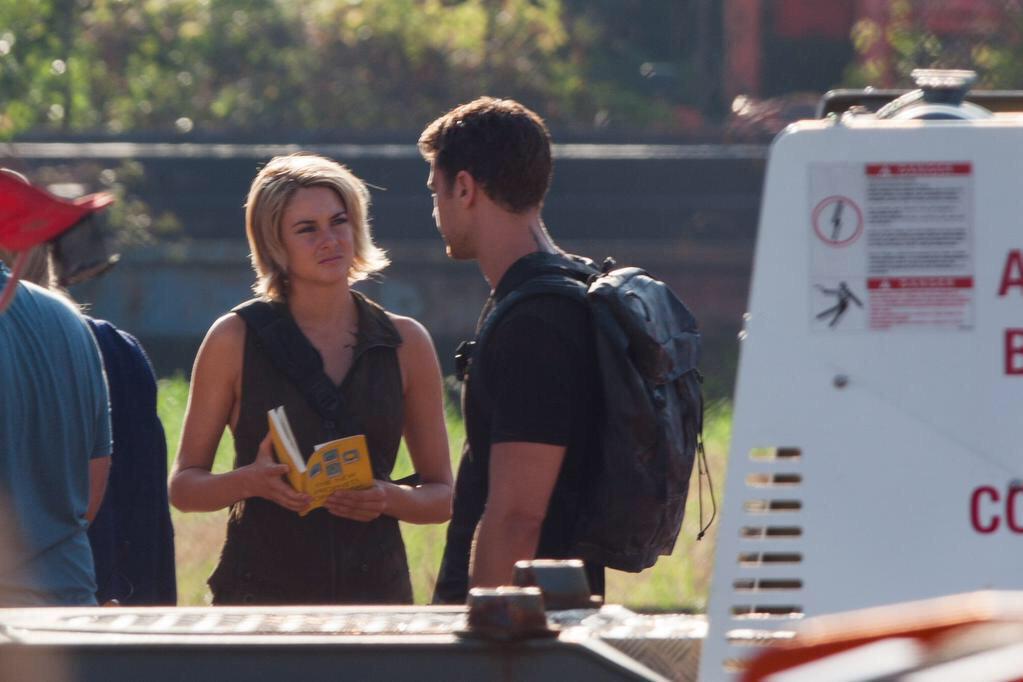 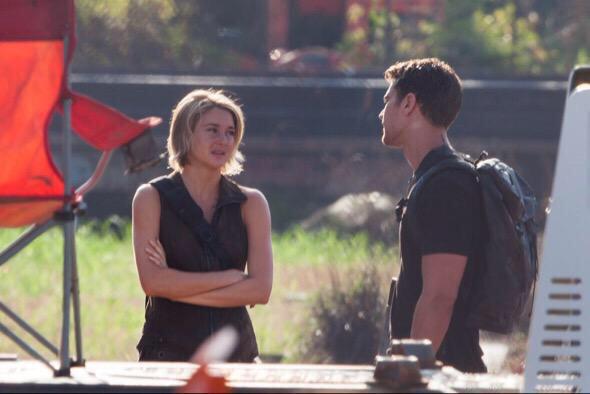 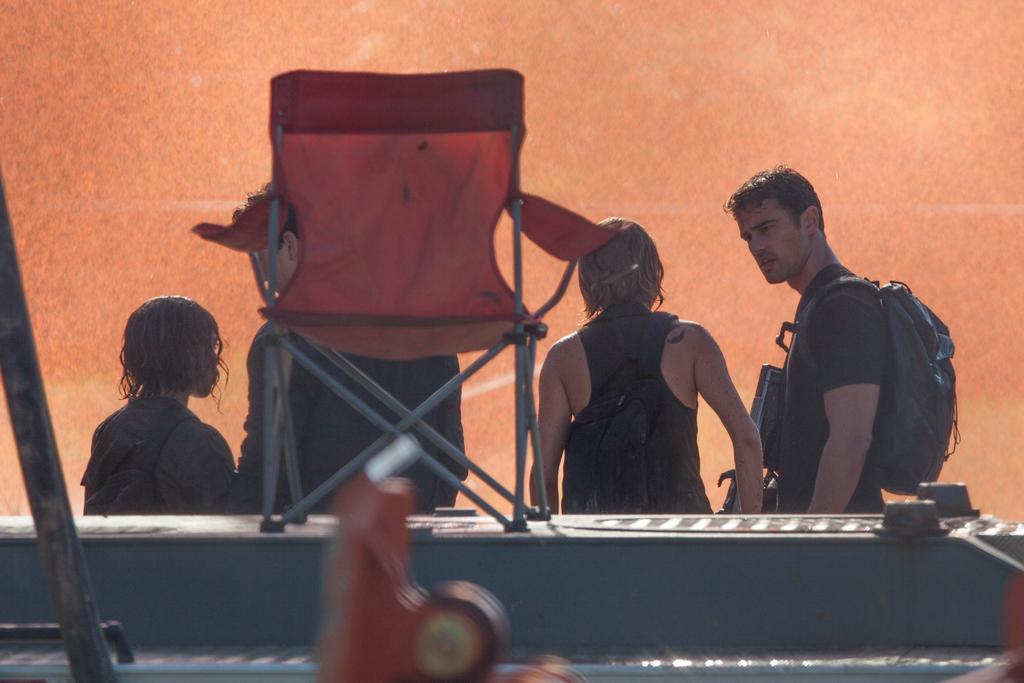 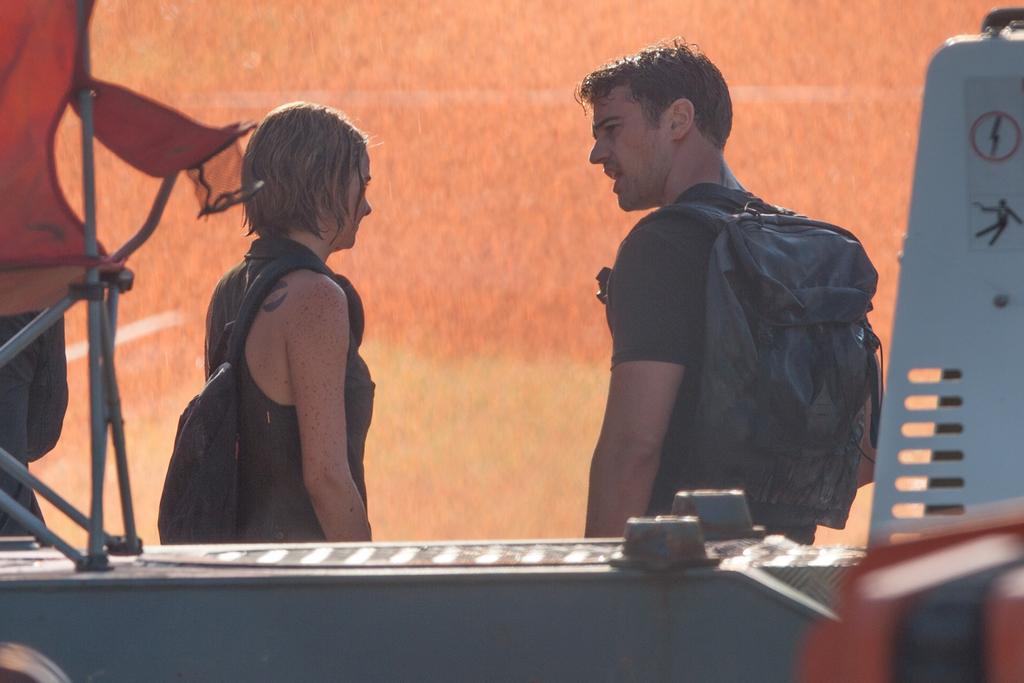 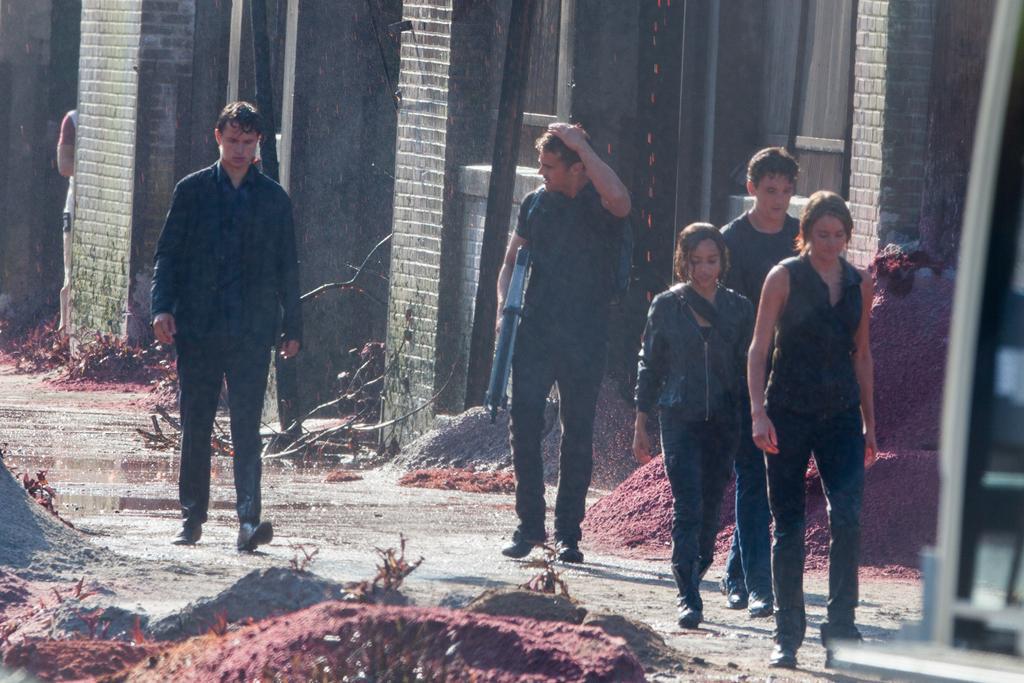 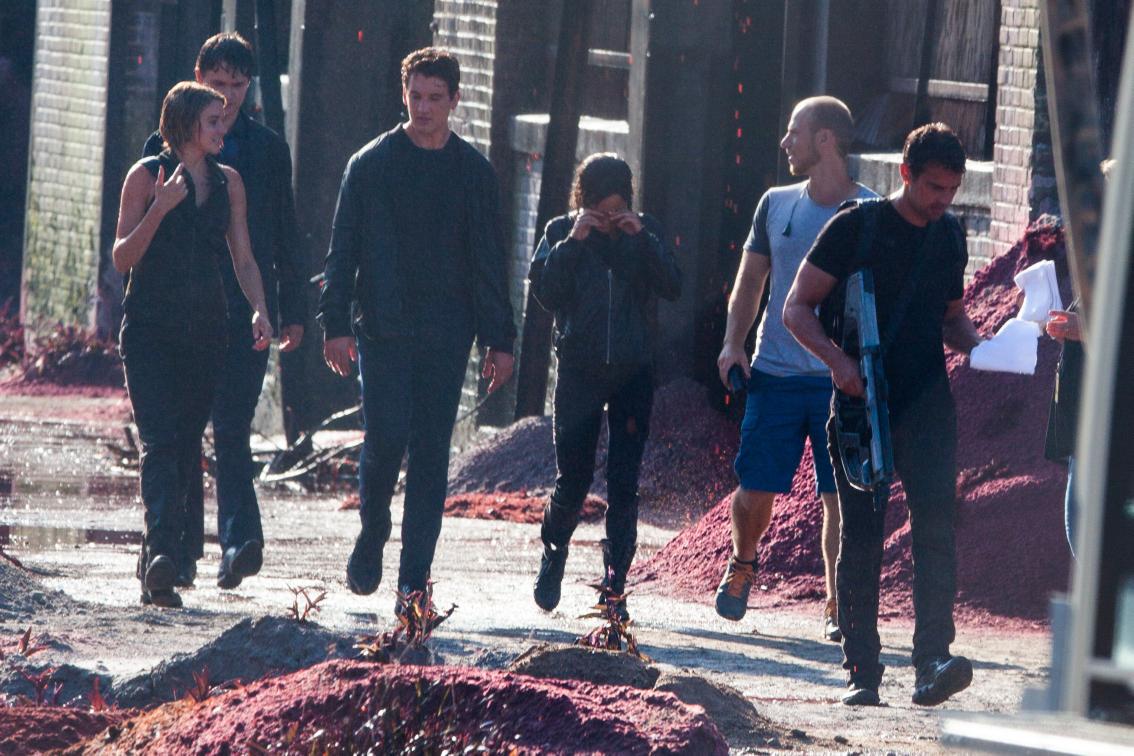 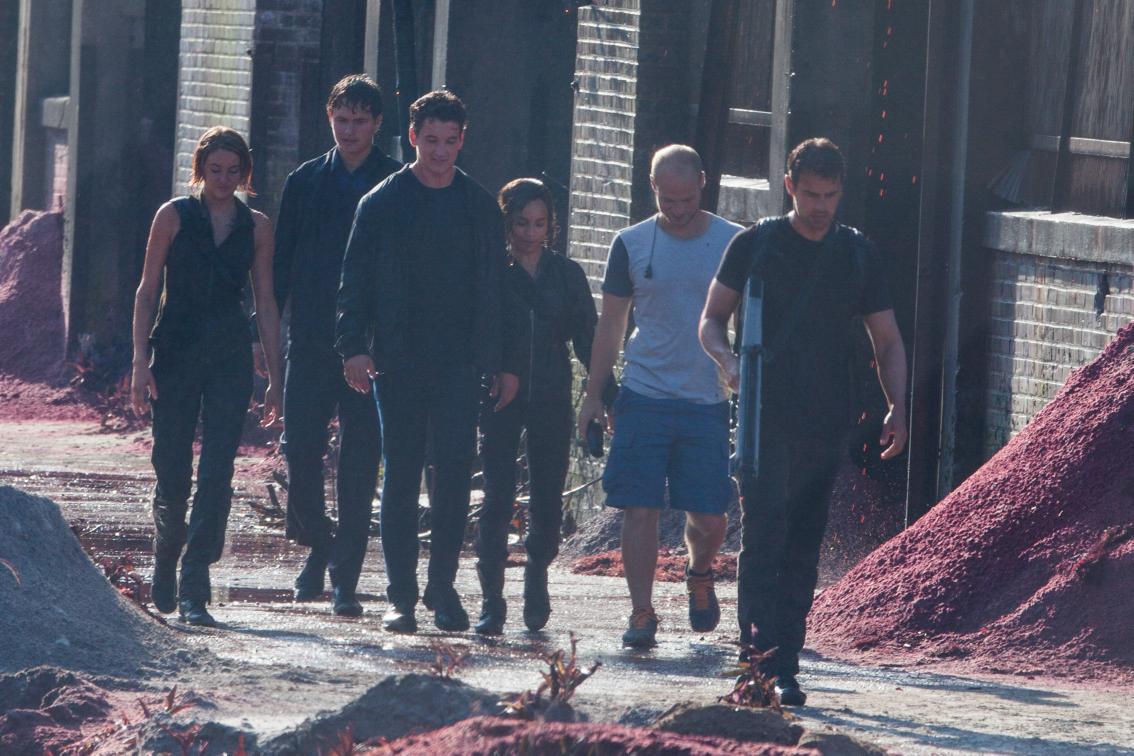 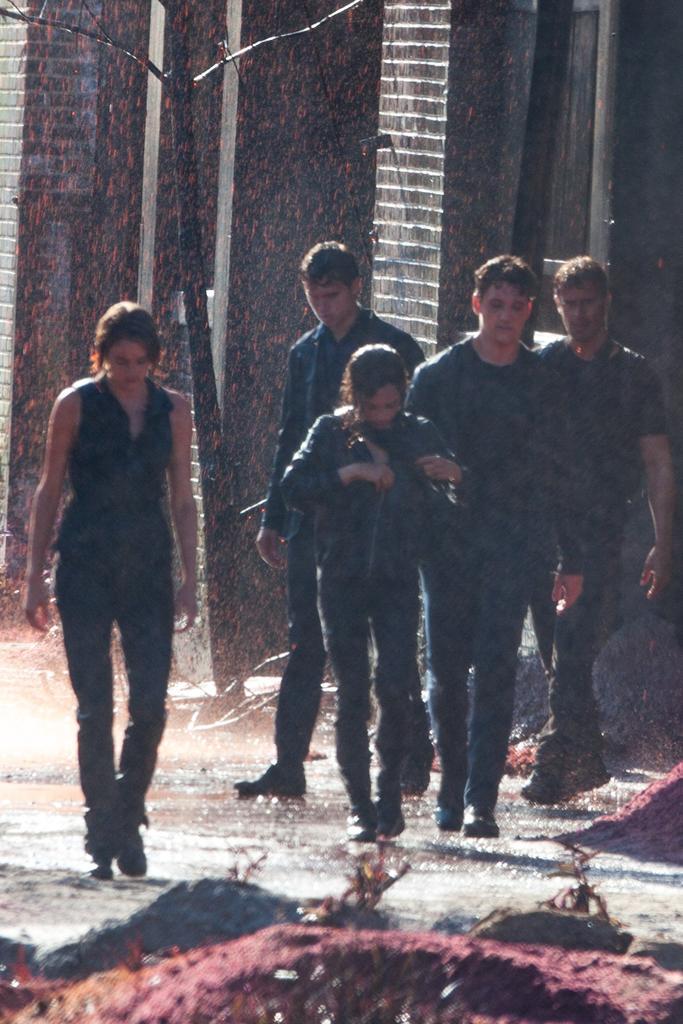 Shailene Woodley on set of ‘Allegiant part 1’ via @AtlantaFilming on Twitter.

Shailene Woodley and Theo James on set of ‘Allegiant part 1’ via @AtlantaFilming on Twitter.

Ansel Elgort and Miles Teller on set of ‘Allegiant part 1’ via @AtlantaFilming on Twitter.

Can you guess which scenes they were shooting? Tell us in the comments or tweet us!

Great news Initiates, The first set ohoto from Allegiant has finally come. Who’s in it? Oh, our lovely Caleb Prior! That is right Initiates, Ansel Elgort is in the first Allegiant set photo.

Go ahead and fangirl at the picture below:

Lionsgate has announced that Nadia Hilker will be playing the role of Nita in Allegiant. If you don’t remember Nita, just know that she is the one that gets Four in a whole bunch of trouble.

Lionsgate has also officially announced the start of production on Allegiant. Allegiant is the third installment in the Divergent series.

You can read parts of the press release below.

The rest of the cast includes

Welcome to the Divergent family Nadia.

Initiates what do you guys think of our Nita? Share your thoughts in the comments below.

To me what this says is that Lionsgate has lots of faith in Schwentke to finish the series.

He was only confirmed for the first part but most likely he’ll direct both parts. We’ll have to wait and see for that.

Noah Oppenheim, who also scripted YA adaptation “The Maze Runner,” is adapting the first part of “Allegiant,” which, like predecessors “Harry Potter,” “Hunger Games” and “Twilight,” is being split into two films.

The Hollywood Reporter is reporting that Noah Oppenheim will be adapting Allegiant for the big screen. He will be writing Allegiant Part 1.

Doug Wick and Lucy Fisher have stayed on and will produce all 4 films in the Divergent series.