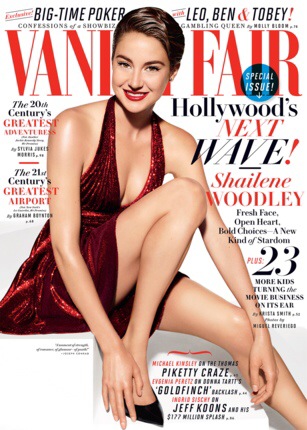 Shailene Woodley is featured on the cover of a special issue of Vanity Fair. In the interview Shai talks how she felt about being cut from The Amazing Spider-man 2, acting and Miles Teller.

Check out an excerpt:

Shailene Woodley tells Vanity Fair senior West Coast editor Krista Smith she nearly quit acting after her supporting role in The Descendants earned her laurels from Hollywood and sudden success. “Somebody came to me and said, ‘I can’t wait to see what you do next.’ I took that as pressure—that I had to live up to somebody else’s expectations,” she recalls. “There were a few months where I was like, ‘I don’t want to act anymore.’ And then I got over it and realized it’s none of my business what other people think of me.”

Though Woodley has a reputation as an actress with a conscience, she tells Smith she realizes that not everyone wants to hear about it. “As much as this industry is a platform for talking about big issues, there’s also so many fuckin’ issues. You could talk about Russia, or Argentina, or fracking, or G.M.O.’s. Maybe the only thing that I’m supposed to do is just show up and be me in every moment. Because I do feel like one of my gifts is to be open and lovely—simple things like smiling at strangers and having kind, small interactions. I think that is what’s going to ultimately shift things.”

Her refreshing sensibility has helped her deal with the disappointments that follow a career in acting—case in point, her reaction to her role as Mary Jane Watson being ultimately cut out from The Amazing Spider-Man 2. “For a few hours it was literally like, ‘Oh, my God, was I awful? Why did they cut me? What are people going to think?’ I woke up the next morning and I was like, ‘O.K., it makes total sense.’ I’m a pretty spiritual person, so I can just sit back and trust that everything happens for a reason, even if my ego doesn’t like it.”

Woodley also confides in Smith that her commitment to saving the world could get in the way of her love life—at least when it comes to dating a fellow actor, which she’s hesitant to do. “I’m never going to say never. I love acting, but I also really love nature and most actors don’t want to get dirty.” She tells Smith she considers herself lucky not to have had to work with any, as she puts it, “dicks,” and shares a special camaraderie with Miles Teller, her co-star in last year’s The Spectacular Now and Divergent. “I look at Miles and, like, I’m sort of Julia Roberts in the same way she is to George. Their relationship I could see being our relationship in 20 years, and that really is special.”

You can read the full interview on June 12 when the magazine is released digitally.