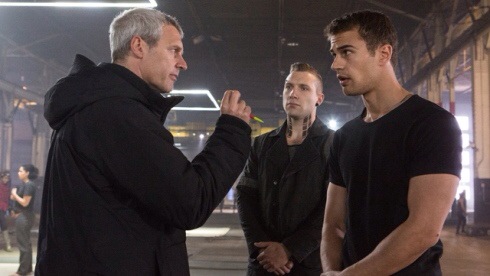 Variety is reporting that Divergent director Neil Burger will not return to direct the second movie, Insurgent.

“Divergent” director Neil Burger will not helm “Insurgent,” the second title in Lionsgate’s upcoming young-adult franchise, and the studio has set the sequel for a March 20, 2015, release.

Neil Burger is a rock star and he is doing a fantastic job on Divergent. We can’t wait for you to see the film. But as amazing as Neil is he still cannot be in two places at once and thus needs to finish post production on Divergent while we gear up to start production on Insurgent. So, although Neil will continue on as part of our Divergent family as an executive producer, we sadly have to find another director for the next chapter in Veronica Roth’s fantastic series.

Burger is currently in post-production for “Divergent,” starring Shailene Woodley, for a March 21, 2014, release and Lionsgate is currently seeking another director for “Insurgent.”

The March, 2015, release date requires that production start this spring. Lionsgate also announced Monday that the third film, “Allegiant,” will be released a year later on March 18, 2016.

The “Divergent” franchise — released via its Summit brand — is viewed as a key to Lionsgate’s strategy to lead in the young-adult genre. Summit’s five “Twilight” films have topped $3.3 billion in worldwide grosses and Lionsgate’s first two “Hunger Games” have pulled in over $1.4 billion.

Lionsgate CEO Jon Feltheimer told Wall Street analysts in May that owning “The Hunger Games” and “Twilight” gives the company a catalyst in launching other properties. He noted that “Divergent” has been dated for release on the same slot used last year for the release of “The Hunger Games” and that the books have racked up strong sales.

We don’t know why Neil Burger won’t be back. Maybe it has to do with schedule conflicts.